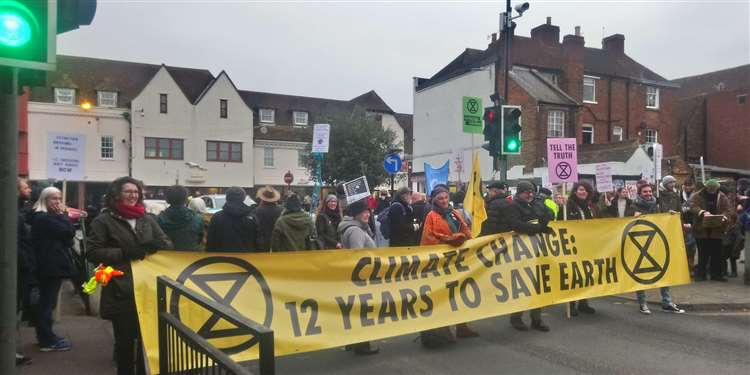 For a group which was set up only a couple of months ago, Extinction Rebellion has already had a significant impact in this country and on Saturday, 5th January it made its presence felt in Canterbury.

Some hundred campaigners blocked the traffic on St Peter's Place around the West Gate for seven minutes at a time up to 2.30pm, with a large banner stating: Climate Change: 12 Years to Save Earth.

A number of Canterbury District Greens have joined Extinction Rebellion and were involved in Saturday's protest. As the local Green Party, we wish to express solidarity with all those involved. We wholeheartedly support the Rebellion's key aim of creating a world that is fit for generations to come.


The UN warns we have just 12 years to avoid climate catastrophe. A new report shows we’ve destroyed 60% of all wildlife in the last 40 years.
Conventional politics has failed us. That’s why we need to take alternative steps to ensure governments do what is required to save our planet and ourselves. We applaud the work of Extinction Rebellion and all those who took part on Saturday.