Turn Your Key for Canterbury 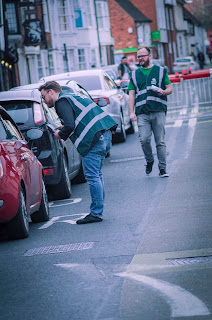 On Saturday 11th March Green Party members spent the afternoon approaching all vehicles waiting at the St Dunstan's level crossing when the gates were down to ask them to turn off their engines. They distributed flyers giving some facts and figures about air pollution in Canterbury and gave stickers for car back windows to those drivers who requested them to alert other drivers to switch off their engines when stationary.

The vast majority of drivers were friendly and receptive to the message: Turn your key for Canterbury.

Greens will be having similar Action Days this year to raise awareness that levels of air pollution in our city often exceed those permitted.
Posted by Pat Marsh at 16:10