Amelia Womack, Deputy Leader of the Green Party of England and Wales, addressed a well-attended public meeting in Canterbury on 11th July. Her topic was Building the Green Vision.

Amelia first focussed on how the General Election had changed the political landscape completely, with Labour being wiped out in Scotland and the LibDems across the country, while the Green vote trebled. We have a five-party system now where more people than ever voted Green instead of voting Labour “to keep the Conservatives out”. One million people voted in support of an end to austerity, action on climate change, and all the other policies of the Green Party. Nevertheless, this encouraging trend was of course accompanied by the rise of UKIP, which injected fear into the electorate. Greens are a vital antidote to their toxic voice. 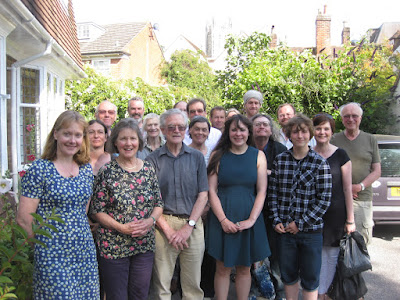 Some people ask if we should still support proportional representation if it would mean a large number of UKIP MPs. Amelia stated this was not a reason to reject having a better voting system. The Vote for Policies website revealed a thirst for left-wing policies. It was fear which won the election: fear around the economy and immigration.

But there has already been a fight-back, as seen in the huge success of Greens in Lancashire against the Conservative dash for gas through fracking.

After George Osborne’s vicious attack on the young and the most vulnerable in the July Budget, the voice against austerity is growing stronger. Most people didn't want a country where people slip through the net. Our job is to communicate how we can build towards a better social, economically sustainable future. Young people especially need to see how the future could be different, eg what a proper living wage would look like.

And the UN Climate Change Conference is coming up in Paris in December where the Green Party will be a central voice on the European and global levels.

We will also be campaigning in the referendum to stay in the EU. We see the EU as having a key role in protecting our environment, human rights and workers' rights, as well as in controlling free market economics.

Locally, the national Party can help us by providing more training on campaigning and being on the committee. Air pollution is bad in Canterbury District with 81 people dying annually as a result. In other towns people have crowdfunded air pollution monitors to draw more attention to this important environmental and social issue.

The message we need to get across is that politics must be for every day, not just for elections. We have a vision to communicate.
Posted by Mark Lankester at 21:28