Greens in first place in Canterbury in Vote for Policies survey 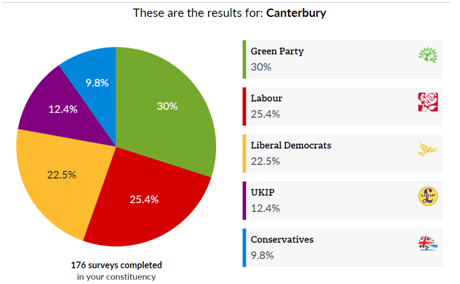 Last week’s launch of the 2015 Vote for Policies website has put the Green Party in first place with 30% in Canterbury after almost 200 local people took the survey. The website surveys people’s policy choices rather than party choices and calculates which party is most closely aligned to them.

Stuart Jeffery, Green Party candidate for Canterbury and Whitstable: “Once again the Green Party is demonstrating that it has the right ideas and right policies for people.

“It is time for people to vote for what they want rather than stick with past allegiances or tactical voting. The only way to get what you want is to vote for it.”

“The surge in support over the past six months has demonstrated that people are seeing the Green Party as their natural home. We now have more members than UKIP and the Lib Dems and we are regularly out polling the Lib Dems. Here in Canterbury we already had a high level of support and the recent surge means that May’s election will be very interesting.”

Notes:
Position at 07:15 23/2/15
https://voteforpolicies.org.uk/survey/results/J5XOevGcb4YyTguBu#/constituency-results
Posted by Stuart Jeffery at 07:19