Local Greens campaign outside Canterbury West while Green Party announces proposal to cut the cost of public transport for passengers by a staggering 10% on 2015 ticket prices. 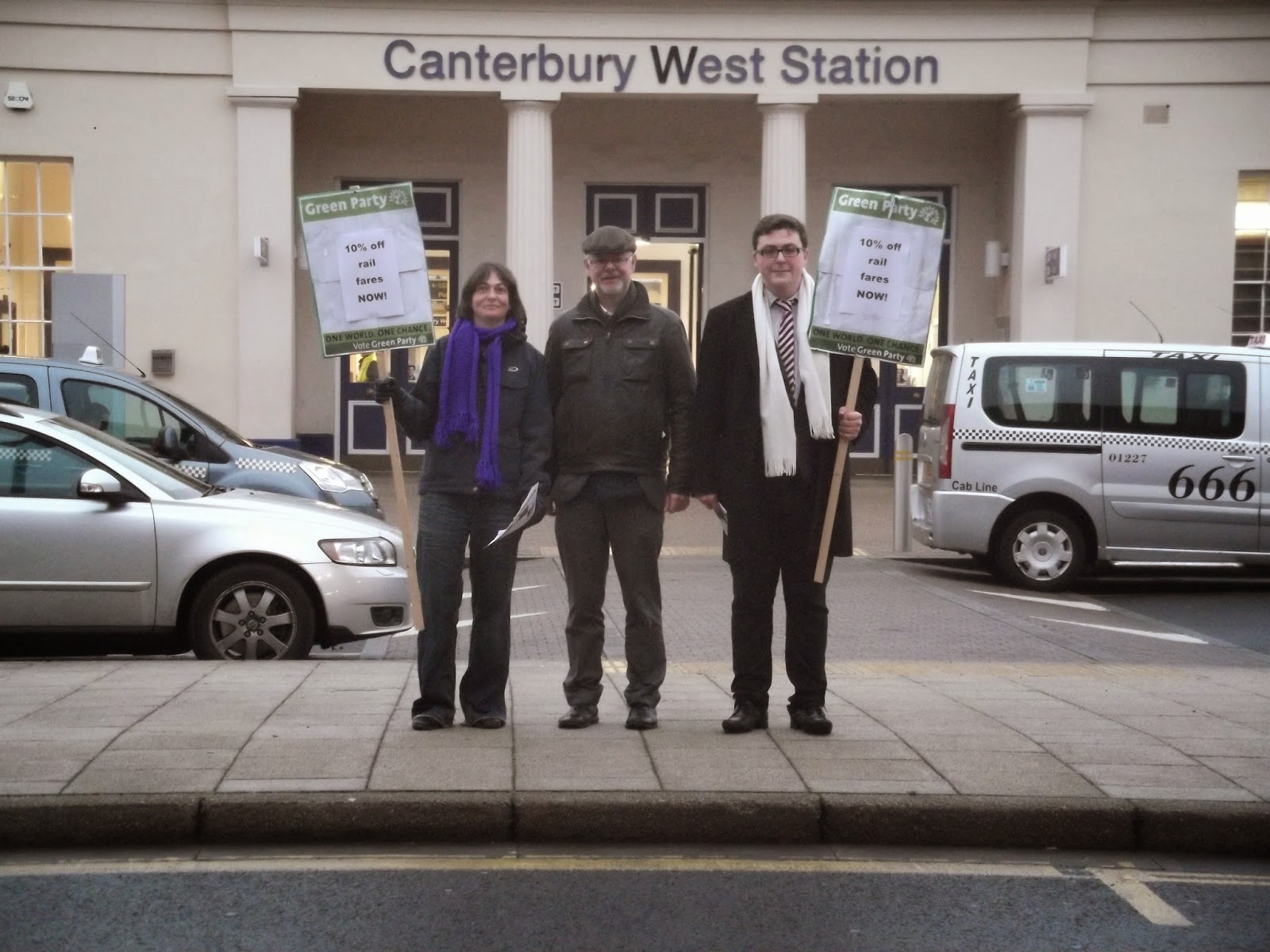 Local Greens were leafleting commuters outside Canterbury West on Monday morning as part of the national demonstrations against the rail fare hikes and on the day that the Green Party of England and Wales announce that they would cut the cost of public transport for passengers by 10% on 2015 ticket prices, as part of their 2015 G.E. Manifesto. [1]

The announcement comes following a recent YouGov Survey that showed a staggering 66% of the public support nationalising the railways, a key policy that has always been at the heart of Green Party core values. [2]

It also follows the announcement that High speed season ticket prices from Canterbury have risen to £6092 – up £148 a 2.49 per cent rise.– as well as yearly tickets from Whitstable rising to £6,232 [3] which equates to 28% of the average (median) salary in the constituency [4].

The party have announced that the 10% cut to fares would be paid for by increasing the level of public investment in rail and bus fares by around £1.8 billion per annum, with the money coming from a diversion of funds for the over budgeted and unnecessary £15 billion road building programme as announced in the Government’s Autumn Statement in 2014.

Under the Green Party’s plans, fares would be cut by 10% in 2015 and held at this lower rate in real terms for the duration of the next parliament. In the long term the Green Party would return the railways to public ownership to secure a cheaper and better service. The Green MP, Caroline Lucas, has proposed a Railways Bill that would bring franchises into public ownership as their contracts expire – which gets its second reading in Parliament next week.

Stuart Jeffery, Green parliamentary candidate for Canterbury and Whitstable in May 2015, said:

"Along with most people, we believe that public transport should owned by the public and accountable to us. We are the only party committed to renationalising our railways and ensuring that there is proper investment in the service.

"It is no wonder that the roads in Canterbury are gridlocked when people are priced out of public transport. Fares have typically risen by over 20% far outstripping pay and making commuting by rail affordable only for the rich."

"Based on 2011 data from the ONS, over 1 in 4 of people in Canterbury are aged 15-29 – clearly due to the student population who bring in around half a billion pounds to our local economy. Young people are being increasingly priced out of being able to afford to commute or explore the incredible countryside we have in Kent – considering a day trip to London is now £29.20 in fares alone - and I do hope this policy announcement spreads the message that The Green Party really is committed to a fairer society to all.

"The new Unibus 24hr service with free Wi-Fi has been a godsend to Kent students, and we should be very proud of that. Unfortunately the same cannot be said to the underperforming South Eastern railway, privately owned by Go Ahead whose CEO is on £500k a year."