Kent Union Should Pay All Staff A #LIVINGWAGE 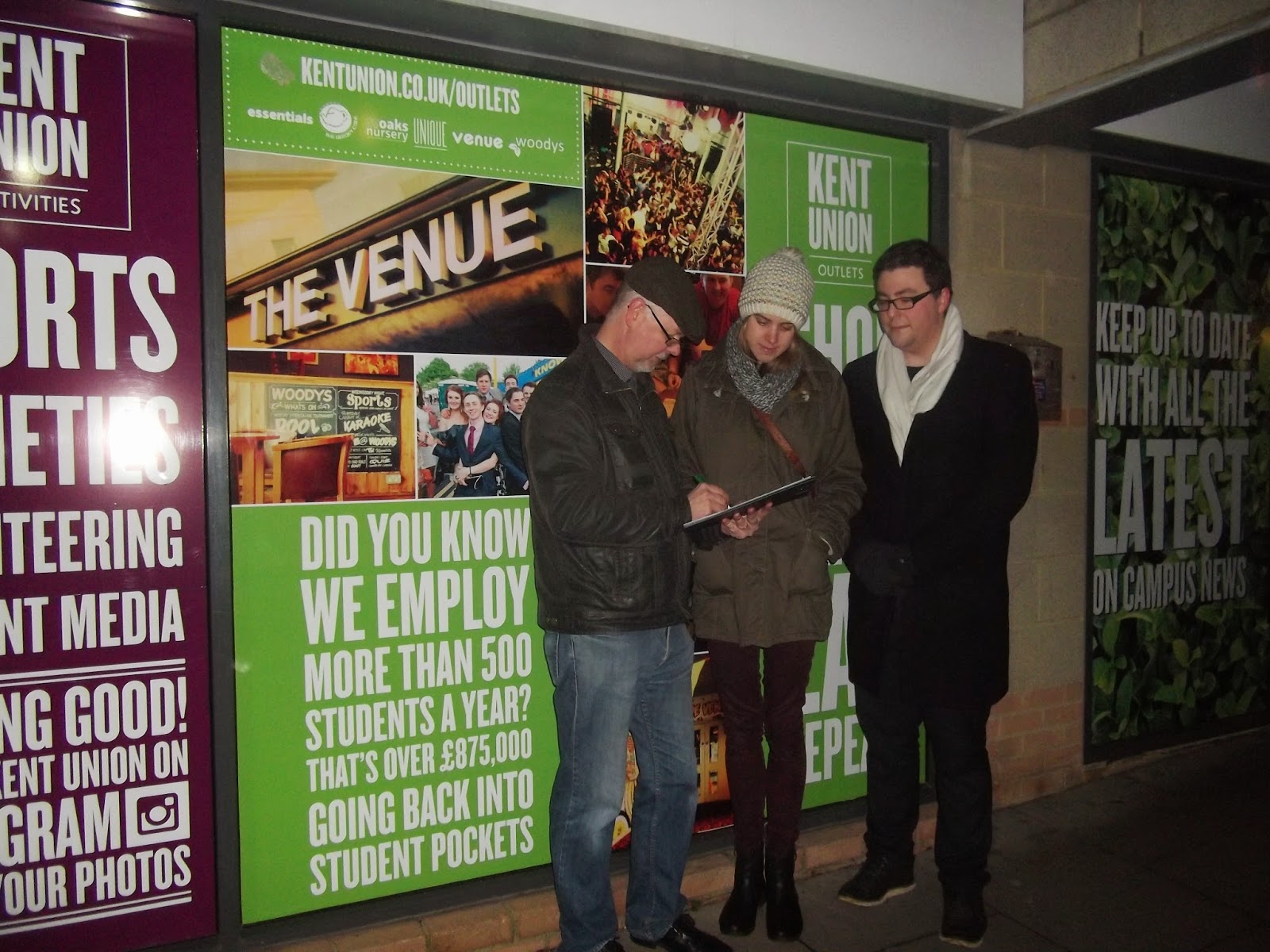 Green candidate, Stuart Jeffery has backed the campaign for Kent Union to pay a living wage. Kent Union have lobbied Mr Jeffery to commit to raising the minimum wage for 18 to 20 year olds, Stuart has gone further and called for all workers to be paid a living wage, including those employed by Kent Union.

The petition has been started by Dave Coccoza, Green candidate for Blean Forest who is also a student at UKC.

Stuart Jeffery, Green Party Parliamentary Candidate for Canterbury and Whitstable: "While Kent Union is a great employer in almost every respect, I was shocked to learn that it doesn't pay all it's staff a living wage, currently a minimum of £7.85 per hour.

"I was pleased to sign the petition and hope that Kent Union can act as a leader for others in the area to ensure that people are paid enough to live on.

"The Green Party is calling for the minimum wage to be set at a level that is needed to live on and we want this to be £10 per hour by 2020."

Notes:
1. Photo: Dave Coccoza, Catherine Peckham with Stuart Jeffery as he signed the petition on campus.
2. Petition is available here: https://www.change.org/p/kent-union-kent-union-should-pay-all-staff-a-livingwage
3. Text of the petition site:

Kent Union is a Students' Union that is, in general, an excellent employer and has lots of accolades we should be incredibly proud of:

- Ranked 17th in the Sunday Times 100 Best Not-For-Profit Companies to Work For, the only students' union in the list.

- Currently hold Investors in People Gold Status, 1 of only 2 students’ unions in the UK to hold IIP Gold.

- Excellent staff benefits including a free NUS Card, discounted entry to The Venue, discounted tickets to the Summer Ball and much more

- and employs hundreds of students each year, giving them a chance to gain invaluable work experience skills alongside their degree, as well as earn money to support themselves through University.

It's clear to see that Kent Union is an organisation that is a market leader - one that other student unions' look to model themselves on and gain advice from. Kent Union offers diverse employment opportunities that directly enhances a CV and can really help a student stand out from the crowd.

However, with the cost of living rising and students from more diverse backgrounds coming to University, it is still paying the majority of its student staff the MINIMUM WAGE.

We believe that a students' union that is leading the way in the industry should follow others such as Machester University SU, Sussex SU and London School of Economics SU in commiting to pay all of their staff a Living Wage at minimum - currently set by the Living Wage Foundation as £7.85 per hour.

We believe that all staff, both career and student, employed via Kent Union, including undertaking work via Jobshop, should be paid the living wage at minimum and there are countless benefits to support the arguement:

- Students with multiple jobs will be able to reduce their hours through increased pay, allowing them to focus more on their degrees

- More students will be encouraged to work for Kent Union as opposed to working elsewhere at an employer that may not offer the same benefits.

- It would add to the already long list of accolades and generating a great deal of positive PR by being a market leader and commiting to the Living Wage.

This is more than just paying staff an increased wage - it is about paving the way for other student unions and to educate people that paying the minimum wage is NOT the only way to do things. Kent Union should be an employer that sets a good example to the future leaders of tomorrow on how employees should be treated.

We want to live, not just exist.
Posted by Stuart Jeffery at 09:38