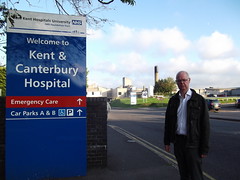 Following the launch of the Campaign for the NHS Reinstatement Bill 2015 on 4th October, Stuart Jeffery the Green Party's Parliamentary Candidate for Canterbury and Whitstable has pledged his support for the campaign. Stuart is a long standing member of the Keep Our NHS Public campaign and has served on their steering committee; he is also an NHS Director.

Stuart Jeffery: "The launch of this great campaign is very welcome. The NHS has been subject to increasing privatisation and marketisation for the past 25 years; a policy which has decimated services, increased costs and left patients to fall through gaps in provision.

"The NHS in Canterbury is struggling with its poor CQC report, yet the successive governments have sought to put services out to tender rather than supporting the NHS.

"The increasing number of different providers of health care not only cost a phenomenal mount to administer through various contracts but they also leave gaps between services for patients to fall through.