Campaign to save Whitstable Delivery Office. 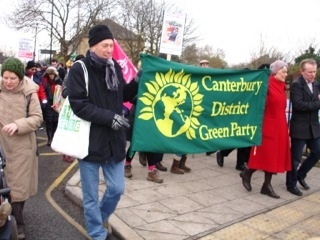 Canterbury District Green Party opposes the proposed closure of Whitstable Delivery Office and supports Whitstable postal workers taking industrial action to try to prevent it.
The proposed closure would not only be bad news for Whitstable residents but also for those of Canterbury, as it would mean Royal Mail employees being forced to commute to and from the sorting office in Canterbury four times a day. In addition, members of the public would have to travel to Canterbury to collect parcels which could not be left with neighbours.
The consequence of this action by Royal Mail would be an estimated 800 extra miles a day travelled on our roads. That works out at around 192,000 extra miles a year.  As every local resident knows, Canterbury already has a huge problem with congestion and resulting poor air quality; this would only exacerbate the problem and cause further misery for residents. Large parts of the city have been declared an Air Quality Management Area in which the level of nitrogen dioxide exceeds levels set down by DEFRA and the EU. Royal Mail’s proposed action would therefore adversely affect the quality of life of all Canterbury residents. Whitstable would also see increased traffic and the end of the iconic postie on a bike. Furthermore, the action would add to the district’s carbon emissions at a time when councils are pledged to act to cut them in order to limit the impacts of climate change.
Canterbury & District Green Party Secretary Pat Marsh says: “We call on Royal Mail to reflect on the human and environmental cost of the proposed closure, abandon its plans, and bring some good news to the post office workers and residents of Whitstable and Canterbury alike.” 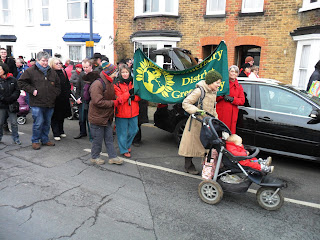 Several Party members attended the first Day of Action and Carnival of Resistance on Saturday, 12th January and joined the march through the town to show their support. There was a party atmosphere with most of the 300-odd crowd wearing something red. Entertainment was laid on by fine local bands outside the Cromwell Road Office. The action delayed a mail lorry crossing the picket line and other Royal Mail vans were backed up for some considerable time. Apparently, Royal Mail had to bring in 17 managers to deal with the rounds. Their spokesman, Ray Tompsett, appeared too scared to come out of the delivery office and talk to local community coordinator, Julie Wassmer and postal workers' union rep, Chris Stone.
Speakers during the day included Regional Secretary for the Kent branch of the Communication Workers Union, David Banbury, who said: “Ultimately we want to save Whitstable delivery office as there doesn’t appear to be a strong business case for moving it to Canterbury. It would mean more traffic on the roads in morning rush hour, delays in deliveries reaching Whitstable and longer distances for customers to pick up parcels. People want a local service and the one we’ve got now works.”
Pete Bingley coordinated a slogan − It is our Royal Mail and it is not for sale − revealed on the day in a Mexican Wave which was filmed and will be uploaded onto YouTube as a permanent message to Royal Mail.
An online report can be read at http://www.thisiskent.co.uk/Hundreds-protestors-march-Whitstable-post-office/story-17839353-detail/story.html and there were two television news reports: http://www.bbc.co.uk/news/uk-england-kent-20985542 and http://www.itv.com/news/meridian/story/2013-01-11/postal-workers-to-strike-in-kent/

Posted by Canterbury Green Party at 20:29