Blean Forest residents have now all received our leaflet with information about the Green candidate, Russell Page, Chair of Canterbury Greens, and about where we stand on local issues. Thanks go to all who took time out to tramp around the ward acting as posties.
On Saturday 8th two of us also joined Russell knocking on doors in Blean. It was a beautiful afternoon, which meant we met plenty of people out enjoying the sunshine. Many residents were amenable to having a chat about the by-election and the issues that concerned them. 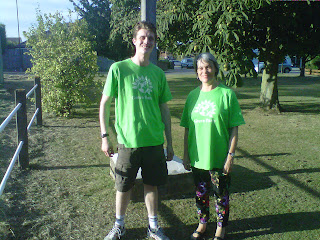 Perhaps most heartening for our Party in the long term was news from several households that first-time voters have already decided to vote Green. This is clearly an excellent sign for the future.


Tactical voters in the ward were very interested to hear that the two Green candidates came a very respectable second to the Conservatives at the last local council elections in the ward in 2011. The Lib Dems have long been the main opposition to the Conservatives in Canterbury, but their current unpopularity looks set to favour the Green Party as the credible alternative to the Tories on the Left. The fact that Greens are now in charge in Brighton and Hove, and have significant numbers of councillors in towns and cities all over the country, met with surprise from some voters and was evidently a cause for reflection.
Local issues picked out by residents on the doorstep included the proposal for a 20mph speed limit on residential roads and around all schools. One man, who votes Green, thought flashing lights on roads around schools, as they have in Harbledown, would be a more effective measure. Several people supported the idea of new building going to brownfield sites in Hersden rather than greenfield areas, expressing special disquiet about the University’s plans for developing Chaucer Fields, which lie in the ward. Residents on School Lane are also concerned about the fact that Abbott Construction is apparently planning to build on a site adjacent to their road, with access from it. The location is currently meadow and woodland. It seems this project is in the early stages and no local campaigning against the development is yet underway.  This is clearly an issue to be monitored, and residents need our assurance of support in opposing construction on the site. Some voters wanted to engage in a discussion of education, sharing Green misgivings about the new ‘free’ schools and about the grammar school system in Kent
National issues often impinge on local elections, of course, and several women voters mentioned how impressed they were with our Green MP and former leader, Caroline Lucas; they thought many women would be voting Green because of her, and on account of their own concerns about the environment and lack of fairness in our society. Other residents said that they would vote for neither of the Coalition parties currently in power owing to dissatisfaction with their policies.

Overall, Saturday’s campaigning was extremely worthwhile, if only for the number of Blean Forest residents who said they would consider voting Green on 20th September. This is unlikely to be translated into a large number of votes, but it reflects the fact that fewer people nowadays feel a lifetime commitment to one political party. This can mean they stop going to the polling station altogether at election time, but it may also work in our favour when they start looking for an alternative to the parties which have failed to fulfil their hopes and expectations
Posted by Canterbury Green Party at 21:38